Hard Drive Enclosures: How Waterproof And Dustproof Are They? 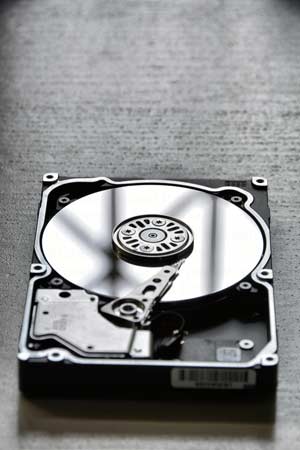 One of the things most folks don’t know is that standard hard drives are not airtight, and attempting to create that type of seal may result in significant problems for some models of hard drive. The very operation of most hard drives is benefited by the presence of air. Reading and writing heads are suspended in mid-air, just above the surface of the spinning platters, as they read and write data to and from the hard disks. Air is introduced into the system through the rotation of the platters; otherwise, the read/write heads would crash down onto the platters, causing damage to the magnetic material that stores your data. The circulation of air also contributes to heat dissipation, albeit in a minor way.

What About Helium Filled Drives?

Some hard drives, particularly at the enterprise level and in some of the highest-capacity consumer models, are actually vacuum sealed — in this case, helium is used to create the necessary space between the read/write heads and the disk platters. Hard drives with greater capacity, lower operating noise, and lower power requirements are made possible as a result of this. The use of helium gas reduces the likelihood of read/write head crashes, and because the drives are sealed, there is little to no possibility of media contamination occurring.

However, there is one drawback: using and handling helium is not cheap at all. As of 2022, helium hard drives are significantly more expensive than standard hard drives, and most consumers will see greater performance improvements by switching to a solid-state drive (SSD), as because of their lack of mechanical parts, they are simply far faster.

Contamination and Hard Drive Filters: What You Need to Know

Despite the fact that most non-high end hard drives are not pressure sealed, they are designed to control the amount of air that passes through them. Filters regulate the pressure in the enclosure and prevent particles from entering (or exiting) the enclosure.

Modern hard drives store enormous amounts of data on their platters, and even a single hair follicle or speck of dust can cause the drive to malfunction and stop working properly. A contaminant has the potential to cause severe media damage by displacing the read/write heads. The filters are designed to prevent this from happening. And in most cases, they tend to. It is rare to come across a dirt or dust based head crash UNLESS the user has opened the hard drive. Then, sadly, all bets are off!

Hard Drive Filters: One For Input, One For Output

Using a barometric (or “breather”) filter, pressure is equalized while particles larger than a certain size (usually 0.3 microns) are prevented from entering the drive. Of course, what many people don’t know is that hard drives can face problems at high altitudes. Due to the fact that the filter cannot keep up with the pressure change at extremely high altitudes, hard drive failure can occur; most consumer hard drives are designed to operate at elevations less than 10,000 feet above sea level.

The breather filter collects magnetic material scraped off of the platters by the movement of the read/write heads and circulates it back to the main unit. In normal operation, the heads do not come into contact with the platters; however, as the drive ages, some media loss may be experienced. Because of the recirculating filter, this dust is prevented from settling back on the platters, which then extends the life of the drive.

In the event of severe data loss, the recirculating filter on a hard drive may turn grey or silver, which is never a good sign for data recovery specialists like our team at Hard Drive Recovery Group. As a result, we recommend that you disconnect a hard drive as soon as you discover that you are having problems with it. Operating the drive while it is in a failed state generally makes the hard drive recovery process more expensive, and the longer you operate it, the more likely your data will be unrecoverable.

Hard drive filters are installed at the factory and remain in place within the enclosure for the duration of the device’s operational life. They are not replaceable by the user anymore, despite the fact that early in the technology’s existence, filters COULD be replaced.

Hard drives are not completely airtight, but they are still protected from the elements. They’ve been designed to keep contaminants from getting into the system. It is not necessary for a contaminant to be large in order to cause problems — the read/write heads are only 6 microns away from the platters, so even a nearly microscopic contaminant could cause a head crash. We’re always stunned when we hear the reasons why a user has opened the hard drive, and have yet to hear a reason that makes sense!

Even in a relatively clean environment, opening a hard drive can result in serious consequences. Engineers from the Hard Drive Recovery Group work in Class 4 clean rooms, which are controlled environments that are suitable for hard drive data recovery. Never open a hard drive unless it is in an environment that has been certified as clean and particle-free — save yourself the pain!